Kat, from Kat’s Cakes, also known as the “Modern Day Gingerbread Lady” has such a talent and I’m so glad she is sharing it with the world!  Kat bakes and creates, and truly considers herself more of an artist than a baker.  If you have a vision, she will create it in edible form!  Kat’s Cakes all started by accident and when she shared her story, I couldn’t wait for you to hear about it too! 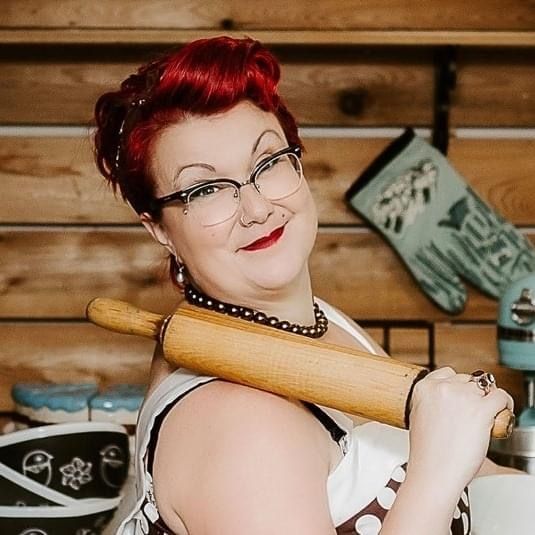 In 2004, Kat lived in England with her partner.  She used to bake for him, and he would take her treats and share them with his workmates.  In England, the word “cake” is used for most baked things – cake is a cake, zucchini loaf is a cake, a gingerbread house is a cake, literally all baked thinks are cake!  Everyone would always ask her partner “Did you bring Kat’s cakes with you today?”  They loved her baked goods!  Over the years, it just became a new word in their vocabulary, “Katscakes.”  So right there is where the name of the business started, but the business hadn’t quite bloomed just yet!

Kat was living back in Canada in 2010, with her two daughters, who were 5 and 1 years old.  She was back in her childhood home, helping to care for her mother who has Alzheimer’s Disease.  Kat’s mother is the “original” Gingerbread Lady; Kat refers to herself as the Gingerbread Lady’s Daughter – the sweetest reference ever!  Her mother was unable to do her traditional gingerbread gifts, so Kat stepped in and while doing the Christmas baking for her, she got creative with her own ideas!

Kat’s father was a dragon boater.  One day there was a gathering with her father’s team mates, and as she was setting up all the gingerbread for decorations and lots of goodies to eat, people were asking how much she would charge for this item or that item!  Kat started pulling random numbers out of her head, “$10, $20, $50, etc.” By the end of the night, she had a long list of orders.  Kat fulfilled all the orders from her long list, and had them delivered, and a beautiful thing happened, friends and families of those who received her gingerbread goodies got excited and called her to place orders of their own! 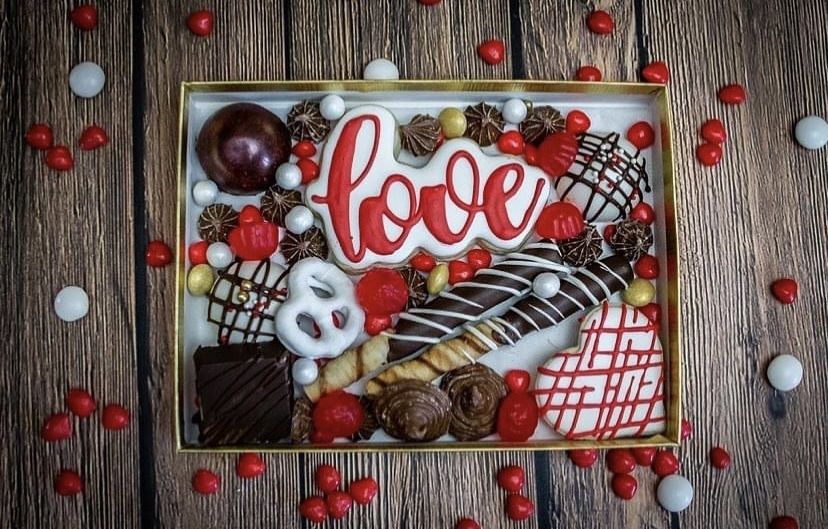 Once Christmas of that year was over, Kat got a call to make a cupcake buffet for a big New Year’s party, and then a call came for a custom ladybug birthday cake for 100 guests!  She took on the challenge in her typical “all or nothing style” and from them on, more and more requests came in, and it was then that Katscakes was born!

What an exciting time for Kat!  Officially a business owner now, her sister, who is a graphic designer, designed her logo.  It is a true reflection of her business, round like a cake or cookie, cream in colour to represent vanilla and brown to represent chocolate!  Her signature cake is vanilla with chocolate buttercream filling – very suited to her logo! 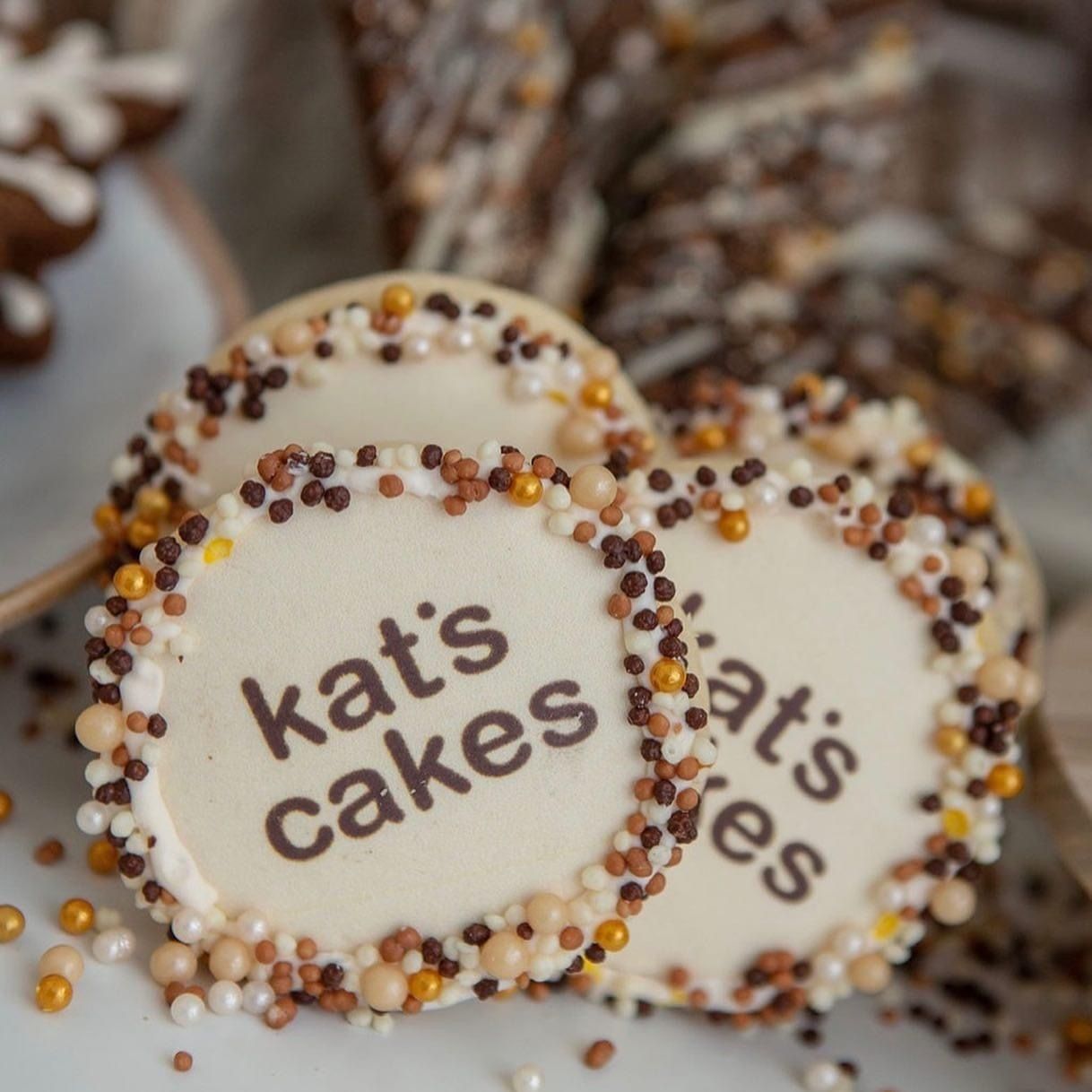 The best part of owning Katscakes for Kat is being able to stay home with her kids; she is able to work the hours that suits her family’s schedule.  There is a downside though, and that is if their family life is very busy (which it is with 5 children), Kat ends up being “mom” in the waking hours, and that baker/artist when everyone is asleep!  This does not always allow a lot of time for Kat to sleep, so finding a mom-baker-life-sleep balance is the biggest challenge! 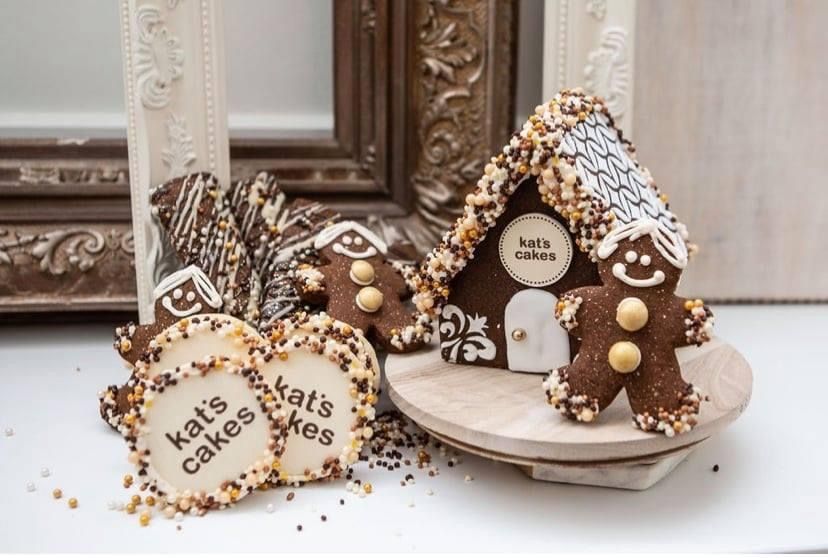 Gingerbread tends to be the gateway into Katscakes business; once someone sees and tastes her gingerbread, she can almost always expect a call back to bake for events during the year!  When it is not gingerbread season, she specializes in buttercream cakes, all buttercream; no fondant cakes there! The best experiences are always the ones where her clients trust her creative ability; Kat’s favourite customer is the one who phones her with their theme and budget, and then leaves it to her to create something amazing!  Kats creativity comes from within; when someone contacts her with an idea, she almost always has a flood of ideas to discuss and tinker with to create a product that is beyond expectation!  She has a pretty bulky file of ideas and inspirations, as well as a long “baking bucket list” for styles and techniques that she’d like to try!  In the baking community, bakers/artists share their techniques and ideas and often get inspired from each other, taking care not to exactly replicate someone’s design, but rather be inspired and motivated by them!

There have been so many highlights in Kat’s 10 years of business!  One that stands out is when Kat collaborated on a stylized wedding shoot for an international wedding magazine; she created an elaborate Russian palace out of gingerbread for display at the wedding, along with some delicious desserts that echoed the style of the palace!  Another highlight was the year that Kat won the Hyatt Regency Gingerbread Competition for the first time!  It was brilliant; Kat had no idea she was even going to get a special mention, let alone win!  She said she will never forget that night – they called up third place, a team over a dozen culinary students, then came second place, a team of twenty from another culinary school, and then, they called up first place, “Kat Murray!”  She stood still, and said “What?”  Up to the front Kat went, just her, with a 4-month-old preemie (her youngest) strapped to her chest.  It was one of her very best days, and it was a very proud and funny highlight!  Kat holds this memory close to her heart because with her business being as busy as it is, she does not have time to create elaborate Gingerbread displays for fun anymore! 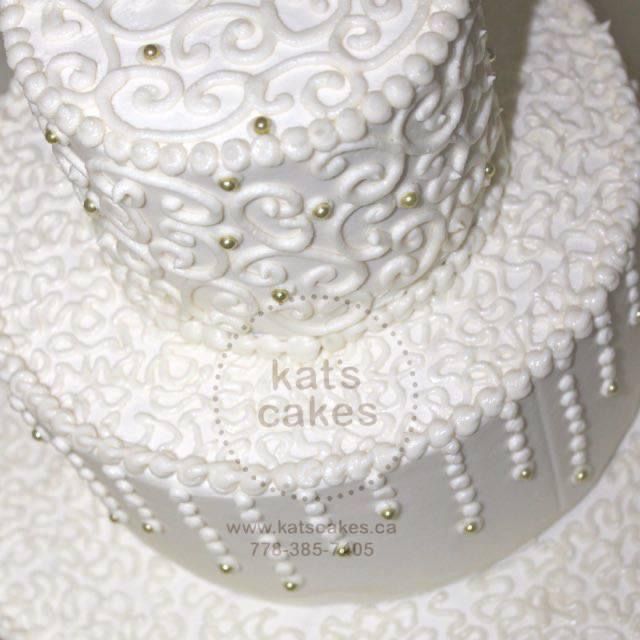 Kat does all the baking for her business, and her family does all the cheerleading, and taste-testing; both of which are extremely important roles!  The support is an amazing feeling for Kat!  Everything that comes out of Katscakes is made by Kat, baked by Kat, and decorated by Kat!  Katscakes is definitely a “boutique bakery” that is a one person show!  During the year, from January to October, Kat bakes cookies, cakes, cupcakes, and cakepops for corporate events, birthdays, anniversaries, weddings, showers, etc.  Kat has even made cookies for someone’s “1-year kidney-versary” (a one-year celebration after a kidney transplant)!  Yes, Kat can create a birthday party for your kidney and make it an even more magical event!  From mid-October up until Christmas, the Katscakes kitchen is dedicated to gingerbread only!  Everything Kat makes is made upon request, using traditional and surprisingly simple recipes, with her own special twist!  Her goal is to create beautiful and unique desserts that spark joy and bring the taster back to the nostalgia of their childhood!  This past Christmas marks 10 years of Katscakes, and in celebration of that, Kat will be launching a new website with a fresh new look!  The Katscakes of 2020 is vastly different than the Katscakes that began in 2010.  She will be introducing some new products that suit the ever-changing needs in the face of this pandemic. 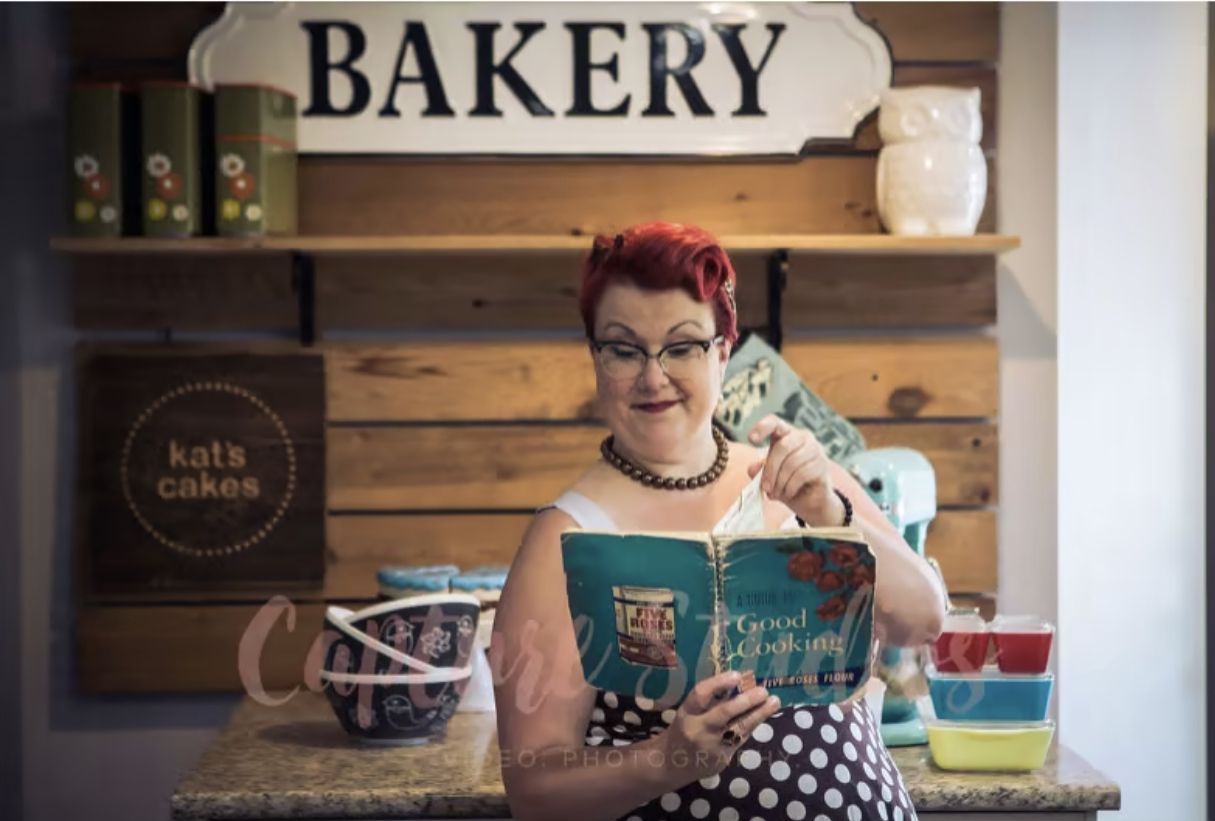 Take a look at Katscakes on Instagram and Facebook, under the handle, @katscakes!  Give her a like and follow; supporting local is such an amazing thing to do!  If you would like to reach out to Kat and order something, whether it be her creations, or customize something, the best way is by emailing her at orders@katscakes.ca.  There you can have the conversation discussing the details of your event, and the style of dessert that best suites the number of guests at your venue!  Hope you get a chance to try Katscakes; my mouth is watering just writing this story of hers!